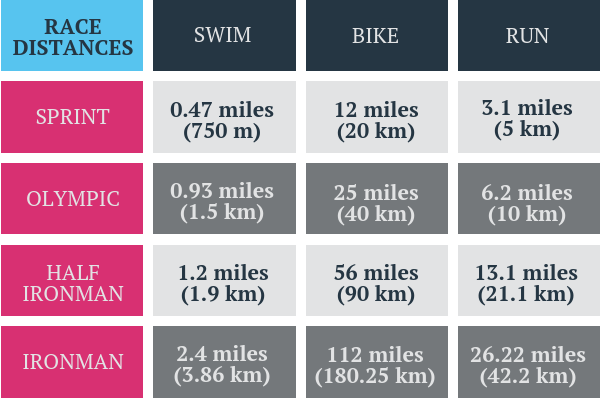 I remember when I started lifting consistently and exceeding my expectations of what I could do. I started searching for other types of physical challenges, and contemplated the triathlon.

Could I do it? Would I like it? Is it too much? How would it fit into my lifting?

In wondering if the foray into this hardcore competition is for me or for you, I decided to talk to a couple people who know personally what a triathlon entails.

What Is a Triathlon?

A triathlon is an intense race that encompasses running, biking and swimming — all three in the same race! While the most commonly known is the Ironman, there are actually four major types of triathlons. In order of distance, most triathlons can be categorized as sprint, Olympic, Half Ironman and Ironman.

How Do I Start?

Often, the most likely person to be drawn to a triathlon is already a runner. Because runners are used to those longer distances and training cardio regularly, it is theoretically a natural progression.

Because it’s the shortest and gives an overall introduction to a triathlon, the sprint is recommended as a first-time race by triathlon coach Alison Headley. Typically, a sprint triathlon is comprised of a half-mile swim, 12-mile bike and a 3.1-mile run. If possible, the most ideal first sprint race is an indoor one. Gyms often sponsor indoor sprint triathlons for their members. Having the sprint indoors controls the run, swim and bike environments, making it more approachable.

Now, here’s a little known fact about training for a triathlon: running isn’t the hardest part! 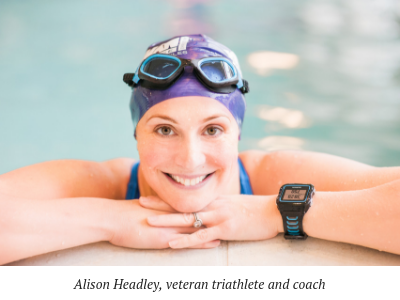 USA Triathlon (USAT) studies have shown that the swim is the greatest problem area. Coach Headley points out that most of us are not prepared to do an open water swim where the water is dark and choppy; we are accustomed to seeing the bottom of the pool or pool walls surrounding us. Furthermore, of all the modes required in a triathlon, the swim requires great form in order to be most efficient, as the resistance of the water demands efficiency to support endurance.

Competitive triathlete Kerry Girona says, “Swimming is easily the most frustrating and demanding from a mental standpoint for me. I spend 5-6 days a week in the water.” Girona’s history is as a longtime competitive runner before she started in triathlons in 2010. She competes in 12-15 triathlons each year since 2016. She attests, “Initially when I started triathlons, I didn’t quite realize just how much of a struggle swimming was. I didn’t realize how slow I was until I got competitive.”

Why Is Swimming So Hard?

Swimming is the most technical discipline of the three. Besides adapting to the outdoor water, a triathlete needs to come to terms with the close proximity of the swimmers around them — people bump bodies regularly. In addition, Coach Headley points out that swimming in a wetsuit is a far different experience than swimming in a bathing suit. For some, the wetsuit can feel extremely constricting.

With biking or running, an athlete simply needs to push harder to go faster. Girona points out that swimming is the opposite, “The best swimmers swim with ease and use minimal effort to go fast.” This is why perfecting one’s technique is so essential for the swim.

What Kind of Training Do I Need?

First and foremost, pick a race and sign up. The commitment will help you mentally focus and create your training schedule.

If you’ve got little to no cardio training in your workouts now, Coach Headley advises giving yourself six months to prepare. If you have some cardio training, she suggests 14 to 16 weeks of triathlon-specific training (that’s three to four months), considering the complex scheduling required. 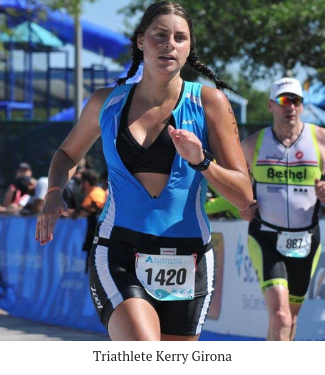 Once you’ve got your timeline scheduled, your focus will be to train twice a week in each mode of race. That means two swims, two runs, and two rides each week. If you can fit it in, two strength sessions would be ideal. Strength training can help reduce the risk of injury, especially in runners.

When training starts, athletes should begin with shorter distances and slowly build each week. For example, in the first two weeks of training, swim distances would be 200-500 yards in the pool. Ideally, as one gets closer to the race, training distances should exceed those of the actual race.

For biking, this could mean starting with 5-mile rides and adding 10 percent each week. For running, one might start with a 1-mile run or walk. As with the swim, the goal is to build so that by the end, training discances exceed race goals. The week before the race will be a taper week.

Girona asserts that for a sprint or Olympic race, one might not need a coach. However, for a half or full Ironman, she believes a coach is essential. Having trained without a coach, and with various coaches as she got competitive, “A great coach changed my life,” she says.

A good coach will look analytically at technique, but also at the emotional and psychological demands of the athlete in this sort of race.

What Kind of Challenges Are There?

As Coach Headley mentioned, the surprising challenge is the difficulty of the open-water swim. She suggests training the swim portion outdoors whenever possible. Girona echoes this sentiment as the swim was and continues to be her greatest challenge.

An equal but non-physical obstacle when training for a triathlon is time management. “Most people underestimate just how much discipline and time training for a triathlon requires,” says Girona. Training is a juggling act of schedules and programming. How does one get in two swims, two runs, two bike rides and two strength workouts all in seven days while also adding in a day or two of recovery?

Most people train a single sport; training to excel in three sports requires time and planning.

Coach Headley advises creating specific days for specific activities, and understanding that in order to get all the practice in, triathletes will need to stack days. This could mean lifting and swimming or biking and running on the same day.

I’m Used to Training for Strength or Hypertrophy — How Will I Adapt? 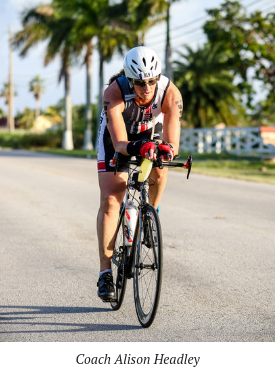 Strength is essential to combat injury. This statement is supported heavily by Coach Headley and Girona. Coach Headley points out that strength athletes are less prone to injury when competing.

However, in shortening the strength aspect of training and increasing the work in swim, bike and run, athletes will lose muscle mass. Muscles will be lost for a max strength or hypertrophy athlete. In fact, as Girona says, “It’s not uncommon to lose a significant amount of muscle when training for an endurance event. It’s difficult to hold onto all of your muscle if you’re putting in hours of endurance training.”

Strength is important for injury prevention in a triathlon but too much muscle will slow down the athlete. Because of this, athletes who are used to embracing gains in terms of strength and muscle mass may have to shift their during triathlon training.

In conclusion, attempting a triathlon is not the same as trying a marathon. With three disciplines to master, all of which require a significant juggling of scheduling and practice, the triathlon takes pointed focus and devotion. The sprint is the easiest race to get a taste of a triathlon, and an indoor one specifically. Preparing for a race like this requires a sacrifice of personal time, and possibly family time. However, accomplishing a triathlon is commendable human feat!

Alison Headley is a certified triathlon coach who also works for marathoners and half marathoners. Find her on Facebook at TRIumph Coaching LLC. She’s been a triathlete for 10 years and a lifelong runner.

Kerry Girona is a ranked competitive triathlete, triathlon coach, and personal trainer. She is the owner of Orlando Fit Body Bootcamp. She’s been competing since 2016 and devotes 13-20 hours a week to training. You can find her on Instagram and Facebook.

A message from GGS…

Understanding how to get more results in less time so you actually enjoy exercise and can have a life outside of the gym isn’t hard, you just have to understand the Blueprint and be willing to trust the process. 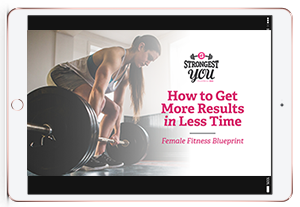 The good news? It’s simpler than you think! 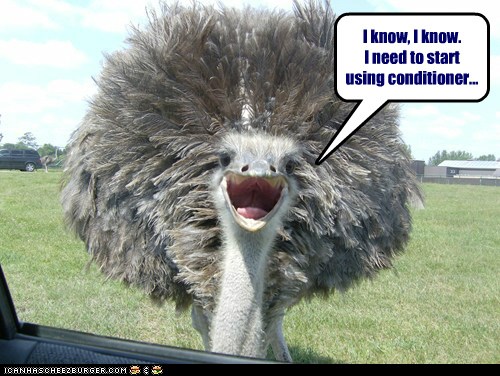