If you have an idea in your head that the world of online slot machines is just for men, it’s time to think again. Gambling habits have changed in recent years, and especially so since slot games moved away from the exclusivity of the casinos and found their way online. With the right opportunity and environment presented to them, research has shown that women enjoy gambling online just as much as men do, and for largely the same reasons.

It isn’t just bingo games that attract their interest, either, even though that was the format most advertised to women in the early years of this century. If they originally found their way online to play bingo, women have since diversified and found other ways to enjoy themselves in the virtual casino world, and that world has reacted to its new player base. There are a range of online slot titles available designed to appeal to the female player, and here are just a few of them.

There’s a very good reason that online slot titles featuring barely-dressed women are popular with a lot of men; men like looking at them. Therefore, logically, you’d expect women to like looking at barely-dressed men. You’d be right. ‘Scandinavian Hunks’ is a game that relies almost entirely on that appeal, and it’s a popular one.

In fact, the game is a direct sibling to ‘Scandinavian Babes’ (the makers of these games have really hit upon a theme here). Are Scandinavian people really that much more attractive than those elsewhere in the world? That’s not for us to say, but the games wouldn’t exist if there wasn’t a market for them. It never hurts to have something pretty to look at when you’re playing a game, and this one definitely ticks that box. Whilst not all women will enjoy objectifying men, those that don’t mind will find a fifteen line game with advancing rewards based on the apparent attractiveness of the men you find. Just like being at school, it’s a popularity contest based on looks! 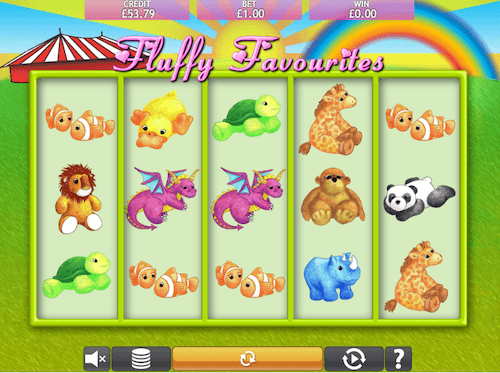 For female gamers who prefer their content to be a little more wholesome, the Fluffy Favourites slot game on female branded Rose Slots is a surefire hit. It’s one of the most enduring and beloved online slot titles anywhere on the internet, and it’s easy to see why. The game is so cute you almost want to reach through your screen and cuddle it.

With adjustable minimum and maximum bets based on how adventurous you’re feeling, ‘Fluffy Favourites’ is a game that appeals to big spenders and low risk players alike, and the constant quest to find the next adorable animal is an endearing task that keeps most players hooked. There are plenty of men who enjoy this game, too, but the fairer sex have always been more interested in cute, cuddly, furry friends than men have, and so ‘Fluffy Favourites’ was always bound to appeal to them in particular. Keep your eyes peeled for the pink elephant when you play; it brings great rewards when it appears!

Every time a new actor is due to be announced to take on the ‘James Bond’ movie franchise, there are always rumours that it’s going to be a woman, and the internet’s gossip pages end up playing host to furious debates in the comments section. For online slot players, an empowered female secret agent has been a reality for a while, and ‘Agent Jane Blonde’ is a 007-style hero having fun in a man’s world.

Just like any good spy, the title character has a range of gadgets to help her solve her cases, and if you can find them while playing they’ll help boost your potential prize pot. Look out for her x-ray specs, lipstick, and her signature explosive chewing gum! She’s got a range of eye catching outfits every bit as sharp and glamorous as James Bond’s tuxedos, too. The quality of animation within the game is really great, with a ‘cartoon come to life’ feel that boosts its appeal. This is a great title for female players who want to stay away from stereotypes.

Until somewhere around the release of the original PlayStation, video gaming was considered to be an almost exclusively male past-time. That all changed when Eidos published the first ‘Tomb Raider’ title, and female players bought it in their droves to play as title character Lara Croft. As it turned out, women and girls had wanted to get involved in gaming for years, they just needed an accessible character to appeal to them. Who would have thought it?

’Girls With Guns’ bases its appeal on almost the exact same lines; women like to see other women represented as strong, fierce individuals who can take on all the same stereotypical action roles that men can. There’s a whole squad of them within the game, all of whom have their own features and bonuses to offer you as a player. It may have borrowed a little bit from ‘Charlie’s Angels’ as well as ‘Tomb Raider’, but the visuals are fantastic, and the game offers you a staggering 243 ways to win. No wonder it’s popular.

On the other end of the scale, there’s ‘Starlight Kiss’. While the idea of falling in love with a romantic prince might seem to be cliched, there’s a reason why there’s a whole genre of cinema known as ‘chick flicks’. Women have been proven time and time again to love a good romance story, and that fact is represented by strong box office success for movies like ‘Four Weddings and a Funeral’ and ‘Love Actually’. In fact, Hugh Grant owes his entire career to the fact that many women can’t resist a good love story.

If that sounds like you, then you’ll probably be a fan of ‘Starlight Kiss’. It hits on every textbook romance point. We have roses, romantic gardens, boxes of chocolate and love letters to find as symbols, with ‘romance’ being the theme of the entire bonus round. Even the cheesy background music is quite relaxing, keeping you soothed as you look to land one of the game’s thirty winning pay lines.

This isn’t to say that women wouldn’t, or don’t, enjoy the exact same titles that are popular with men. They can and they do. For a lot of players, the theme of the game isn’t as important as the risk and reward of the game itself, and so the symbols and the music are irrelevant. For female players who prefer to play a title that reflects their own interests, though, the range is out there, just waiting to be found.