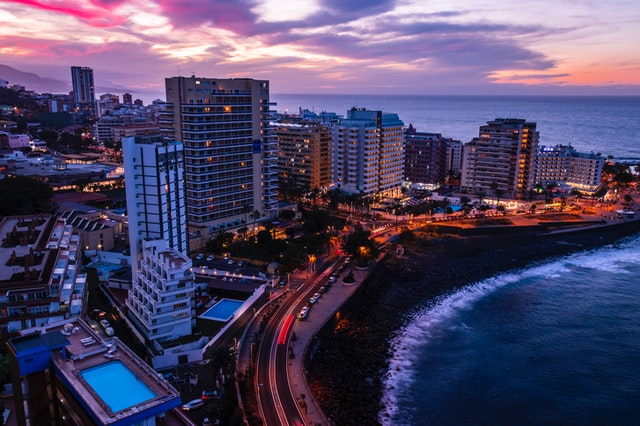 Tenerife is a self-governing territory of Spain and the largest and most populated of the Canary Islands. The island’s the most visited in the archipelago and one of Spain’s most important tourist destinations.

Through its volcanic origin and range of microclimates, its biodiversity makes Tenerife a genuine paradise island for nature lovers. Some of the wonders that Tenerife has to offer are two Heritage of Mankind sites, 42 protected natural spaces, and a National Park.

Tenerife has no wrong time to visit; it has a spring/summer climate all year round. It is most likely to rain, particularly in the north, in November or February/March. The high season is from January to Easter. September is one of the most excellent months to visit, with warm, sunny days and restful nights, and prices have not yet hit their seasonal high.

Tenerife is known for its Carnaval de Santa Cruz, a massive festival with good music, parades, dancing, and colorful costumes. The island is known for its many beaches that range from yellow to black, resort hotels such as Los Cristianos and Playa de las Americas.

The capital city of Tenerife is Santa Cruz. The city is the host of the second largest carnival in the world. The festival from Rio de Janeiro from Brazil is the largest in the world. Every February, the Tenerife carnival captivates millions of people from the island and worldwide. The party begins in the streets on the Friday before Carnival with a spectacular opening parade, where thousands of people in fancy dress dance and have fun until the early morning hours.

In Tenerife, you can enjoy beaches, pools, and party venues. Take your time to visit the resort areas, picnic in pine-infused forests; you can delight your senses with the art, culture, and unique architecture of Santa Cruz, and find peace along the paved coastal pathways on the peaceful west coast. And if all this isn’t enough, there are plenty of souvenir shops from where you can acquire all kinds of souvenirs such as fridge magnets, nanoblock sets or even clothes.

Tenerife has many theme parks, including- Loro Park with its sea lions show, orca show, and dolphin show. Siam Park, the Water Kingdom with its adrenalin pumping Tower of Power ride, and The Wave Palace with the world’s most giant artificial waves at 4 meters. Aqualand with its Dolphinarium and Lava River. Tenerife also has a Jungle Park, the only jungle park in Europe that features a daily Bird of Prey Show. Besides, if you want to have a family day out, Camel Park is perfect for this.

Tenerife has lots of activities to offer, including water sports. The clear waters make it perfect for diving and snorkeling, whilst beaches with large waves are a favorite with surfers, windsurfers, and kiteboarders from around the world. Water skiers, Jet skiers, and wakeboarders also go to the island’s shores to enjoy the beautiful weather. If you want to go sailing, the marinas and ports have many yachts and motor cruisers for rent. The islands can be admired more closely by sailing.

The Gran Tinerfe (H10) hotel is located south of Tenerife on the Costa Adeje, right on the seafront. You can choose to relax at the swimming pools or enjoy the areas of sport from the hotel. The restaurant offers a wide range of delicacies; you will have the opportunity to taste from the best of local and international recipes. Hotel guests can enter the Playa de las Americas casino, located in the Regency building.

It is placed in Los Gigantes Cliffs, and it features outdoor swimming pools with marvelous panoramic views of the coast. In the resort are found chic apartments which also have private terraces.

During your time at the pool, you can enjoy what Oasis Abraxas bar has to offer. Besides this, the resort also has many other bars, the buffet restaurant Regency; and the à la carte restaurant Aqua where you can enjoy your time. Besides, you can also visit the gym and a squash court. To have access to certain services such as laundry or safes, Wi-Fi internet, these are available at an extra cost. For other things such as renting a car or additional information, the staff can be helpful. In addition, the apartments are very close to Los Gigantes Harbour and Puerto de Santiago, at only 1.5 km.