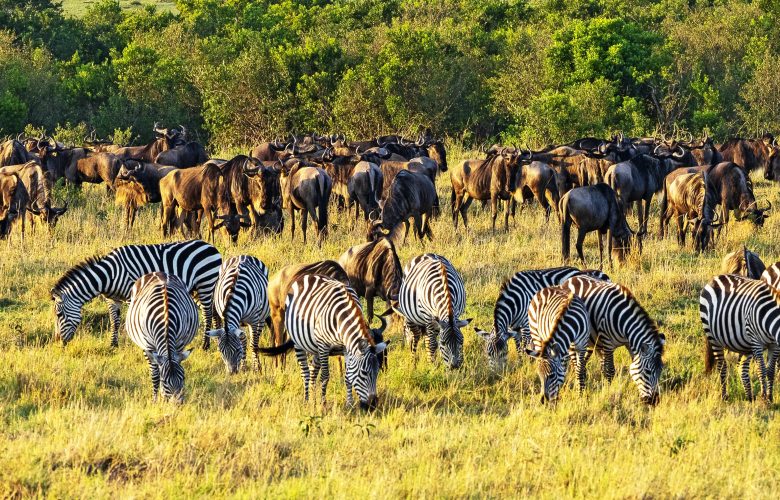 Read this review of the five most iconic holiday destinations in Kenya and see if this country wins itself a place in the list of who-is-who of travel destinations.

In 2019, CNN named Lake Nakuru, Masai Mara, and Solio as some of the top 30 holiday destinations in Africa.

Towards the end of the year, World Travel awards declared Kenya as the World’s leading safari destination. But which are the top 5 holiday destinations in Kenya?

Located about 310KM in the southwestern direction from Nairobi, Masai Mara National Reserve offers an out-of-this-world wildlife safari any month of the year. However, if you would like to catch the iconic wildebeest migration, the best months to visit the Mara is from June to November.

The actual Mara river crossing historically occurs between late May and the end of July, but no one knows exactly what triggers it or when it will happen. The trick is to work with a local tour operator such as AjKenyaSafaris.com to help you keep a tab on the location of the herd and make sure you are there when the drama starts.

During the migration, over 1.2 million wildebeest, more than 200,000 zebras, and different species of antelopes cross the crocodile-infested Mara river into Kenya Masai Mara game reserve. Some die, some are born, and for some, life-long lessons are learned.

June to November is the best time for a Masai Mara migration safari, but if you are not traveling to Kenya to see the migration, you can still visit Maasai Mara in other months and have a great holiday. March to May is the long-rain season in Kenya, and it tends to rain a lot. However, it’s the best time to visit the Mara if you are looking for a cheap package.

Here is a recap of what to look forward to in the Masai Mara in different months:

This is the birthing season for zebras, but with the blessing of the little striped fellows come the predators. Plan your visit around these three months if you would like to see lions, cheetahs, leopards, and possibly film a hunt.

The long rains pound the savannah grasslands, turning the grass green and rich. The birds sing in the crisp, clear air. Many new birds migrate to the Mara, as do predators. When the grass is green and lush, many herbivores will be calving, and this brings predators along. As the grass grows tall, it becomes a little challenging to spot the animals.

The wildebeest migration reaches the Kenyan side of the Mara-Serengeti ecosystem.

There is not much grass remaining, so the grass eaters start moving southward. Of course, the predators follow right behind. You can catch great hunting action.

The Masai Mara resorts and lodges, tented camps, and others are replenishing for Christmas. The weather is usually warm and enjoyable.

The Mara is located in Narok County, along the Kenya-Tanzania border, and it is part of the larger Mara-Serengeti ecosystem. Serengeti is a national park in Tanzania, and it is contiguous with the Kenyan Masai Mara. The two are only separated by the Mara River.

Diani Beach is about 530KM from Nairobi by road in the coastal region and only 28KM from the city of Mombasa. There are hundreds of things to do during the day, and the Diani nightlife is vibrant.

The best time to visit Diani is probably January to February if you are from Europe, America, or other countries that experience cold winters. In Kenya, this is the school season, so there will not be many people on the beach.

Remember, January to February is also Kenya’s dry season, so you can relax on the beach soaking in the sun without rain. Diani is the perfect beach getaway for the April sun.

Make sure to take a dhow cruise to the nearby Chale Island or Wasini Island. For $350, you can try skydiving in Diani. Nothing thrills more than a jump from an airplane, of course, strapped to an experienced guide. Dolphin watching, full-day scuba diving, and a ride on a glass-bottom boat are some of the must-do activities.

Being right on the shores of the Indian Ocean, you might be worried about the humidity. There is humidity alright, but the cool breeze blowing from the ocean tones it down. Diani has been voted Africa’s leading beach destination for six years running by the World Travel Awards.

Like its bigger sister, the Masai Mara National Reserve, Amboseli National Park is also located in the iconic Rift Valley. Amboseli is in Loitoktok, which is about 232KM from Nairobi by road.

Where the Mara is known for its wildebeest migration, Amboseli is called the “Land of Giants” for indeed, giants walk the earth here. You will see elephants in their hundreds. This national park is home to more than 1000 elephants. All the elephants in this park are numbered and coded for easier identification.

Other wildlife that you will see during Kenya safari trips in Amboseli include other members of the big five animals – Lion, buffalo, leopard, but unfortunately, the black rhino is hard to spot in Amboseli. You will also spot giraffes, wildebeests, zebras, hyenas, different types of gazelles, ostriches, and different types of birds.

The best time to visit Amboseli National Park is practically every month, but December to March and June to October are the dry seasons and the best time for game drives.

January and February are excellent times. March is fairly good too. April and May are the rainy season months, so you might want to avoid going there. June to October is perfect for seeing the hunters at work. November is wet with the short rains.

Away from the coast and the Rift Valley, you might want to try a different view in the drier, northern part of Kenya. You can take the long 313KM drive from Nairobi, or you can fly to Samburu airport and go to Shaba National Reserve. This national reserve has been named after Mount Shaba, an extinct volcanic mountain.

This place is steeped in history, and that alone makes it perfect for family getaways. This national reserve was home to George Adamson and his wife, Joy. The movies “Born Free and To Walk With Lions” are based on the lives of these two.

Isiolo County, home to Sarova Shaba Game Lodge, is a semi-arid area, but there is still a huge collection of wildlife to see. These include elephant, leopard, reticulated giraffe, Beisa Oryx, and others. Most of the rooms overlook the beautiful Ewaso Nyiro river

The best time to visit the Sarova Shaba Game Lodge is during the dry season, December to January. During this time, many animals converge at the waterholes and the E. Nyiro river. In the rainy season, the animals will be more scattered since there is a lot of grass everywhere.

You can enjoy game drives; camel safaris, and you must go to the traditional Samburu village for a taste of their culture through song and dance.

Solio Game Reserve is one of the best rhino protection parks in Kenya. It is privately owned, run, and protected. Solio is also one of the most successful private black rhino breeding conservancies in Africa. In fact, many countries in Africa have repopulated their national parks with black rhino from Solio.

Solio is a huge ranch covering more than 17,000 acres. Because of the location of Solio between Mount Kenya and the Aberdare ranges, there are weather discrepancies, like unexpected afternoon showers. Work with experienced Kenya travel agencies such as MasaiMarasafari.in to get the weather right.

In addition to rhinos, you can also see elephants, big cats, gazelles, antelopes, giraffes, zebras, and birds. There is also plenty of wild plant life, some of which are only native to Kenya. The best time to visit Solio Game Reserve in January and February and June to September. In these months, the roads are accessible, the grass is not so long, and the wildlife is easier to see.

Kenya is endowed with an incredible wealth of flora and fauna, which makes it one of the top holiday destinations in Africa. Today, you, too, can have your opportunity to see the Big Five beasts of Africa in their natural habitat and give your kids a chance to see the real Lion King.